History of the Yellow Pages

The concept was originally conceived by Reuben H. Donnelley in 1883

Select A State
History of the Yellow Pages

The name "Yellow Pages" is one that began in the era of print but has transcended that medium as the world has embraced the digital age and has come to signify, quite simply, any telephone directory of businesses, organized by category rather than alphabetically by business name. As print directories are currently in the process of being phased out in favor of online/digital sources, the term "Yellow Pages" has remained ingrained within the public lexicon due to the vast history and brand recognition behind the phrase.

The Yellow Pages originally got the iconic name by having been printed on yellow paper; this ran in contrast to non-commercial listings, which were traditionally printed on white paper. In many countries, the yellow pages are well known, as are their "walking fingers" logo, both of which were first introduced by AT&T in the 1970's. However, as the yellow pages name and logo are not officially registered trademarks of AT&T, they are both freely used by numerous other companies for similar advertising and branding purposes. 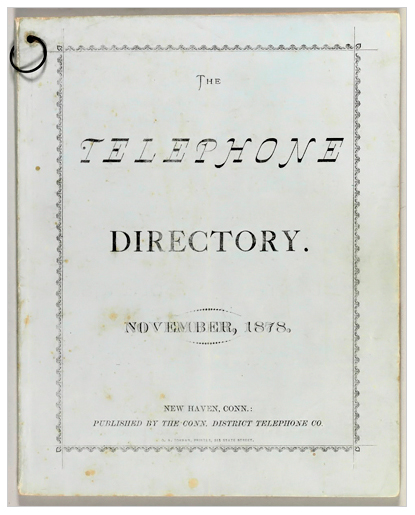 The concept of the yellow pages was originally conceived by a Cheyenne, Wyoming printer in 1883 through pure serendipity; the printer, who was working on a telephone book, had run out of white paper and was forced to use yellow paper instead. The look soon caught on, and this positive accident eventually resulted in the first "official" yellow pages book to be created and distributed by Reuben H. Donnelley in 1886. Currently, the phrase "Yellow Pages" is used in at least 75 countries around the globe, both for print telephone directories (usually published by local phone companies for their local market) and for online resources.

Typically, print yellow page directories are published on an annual basis, distributed and delivered for free within the region that any given phone company provides coverage to. Profits are generated via advertising revenue; local and national businesses will pay a phone company and/or publisher to include ads of varying size and prominence for their goods and services in the directories.

In recent years, however, advertising revenue for print yellow page books have decreased as the medium has fallen out of favor with the public, with both advertisers and the public turning more towards online sources for their business directory needs. As a result, most – if not all – phone companies now offer internet-based versions of their yellow page directories, complete with advertising space for companies to purchase. Internet yellow pages allow a small business to advertise locally and target their audience with single, familiar categories such as "attorney," "florist," or "plumbing" with most if not all services offering paid advertising options which typically provide preferred placement within categories or search results pages.

Online yellow page listings are updated constantly every day, ensuring users are equipped with the most accurate information at all times; meanwhile, print directory users typically have to wait another 365 days (although some publishers print directories bi-annually) before they get any form of an update dropped onto their doorstep, which in turn could become old soon after delivery, and so on. In an unstable national economy where businesses open and close every day, consumers prefer a more flexible and dynamic solution to their business directory needs; hence the slow death of print phone books. This is similar to the newspaper business as online sources provide news immediately leading to newspapers typically printing yesterday's news.

In addition, the ease of access to online yellow pages via common technological devices - computers, tablets, and cell phones - has rendered print directories somewhat obsolete. The Internet has had a particularly broad impact on publishing, causing the closure or moving online of various print publications over the years. Print yellow pages have simply become the latest victim of this powerful trend.

The use of online-based telephone directories has grown to the point that, in 2010, the search term "yellow pages" was in the top 5 highest revenue generator of all search terms in Google's AdWords program; this distinction has only grown more and more since that time, and currently, the term "yellow pages" is one of the most-searched terms on the Internet and collectively generates billions of dollars in advertising revenue each year.

Internet-based yellow page searches differ from standard search engines as results are delivered based on a geographic area, as opposed to relevancy to the original term searched for. Searches can be refined to allow the user to be able to find the goods and services that they are looking for with a higher degree of precision.

However, technology isn't the only reason that the yellow pages have been making the move to digital; environmentalism has taken a toll on print phone books as well, which have encountered scrutiny from environmentalist groups who claim printed yellow pages are a wasteful resource, citing statistics that state nearly 70% of Americans rarely or never use printed phone directories. Groups have issued reports that local municipalities in the United States spend over $50 million a year to dispose of used and/or unwanted phone books, and an additional $9 million to recycle them, an endeavor that is considered difficult due to the low-grade glues and low-fiber paper utilized in their creation that tend to clog up recycling machinery.

In recent years, some cities in the United States – and worldwide – have enacted legal restrictions on the delivery of phone books by local publishers, and a national movement – known as the "opt-out" movement – has resulted in numerous phone company customers declaring that they no longer wish to have print directories delivered to their homes anymore; a wish that is enforceable by law in many parts of the country. If a publisher delivers phone books to someone that has opted out of delivery, fines and other penalties could be applied to the offending company.

Other criticisms have been leveled against the creation of print phone books themselves and the impact upon the environment that process entails. Numerous trees are cut down and used in the creation of paper that has led to rampant deforestation, in addition to the mass generation of carbon dioxide emissions from factories that refine and develop the paper and the books they eventually become, leading to the many factors contributing to climate change, experts say. In San Francisco alone, 1.6 million phone books were distributed annually in 2011, producing 3600 tons of waste which resulted in millions spent – and untold amounts of pollution created – on their disposal.

As time has gone by, more and more phone book publishers – the ones remaining – have been utilizing more and more recycled paper, with the United States Environmental Protection Agency estimating that, currently, 73 percent of phone directory, newspaper and other assorted papers are recycled.

Nonetheless, the march of time and the progress of technology and environmentalism have resulted in the near-end of the iconic print yellow pages directory across the world; in September of 2017, the publisher of Yellow Pages for the United Kingdom, Yell, announced that the business would be fully digitized from January 2019, ending the print publication's 51-year run. The final copies of Yell's print directories were mailed out on January 18, 2019.

However, print yellow pages – however archaic – still serve a valuable purpose as tools in local historical research, trademark litigation, and genealogy, ensuring that while the world at large has moved on to the Internet for their business directory needs, the yellow pages' deep history in print will likely be forever preserved for future generations to come.